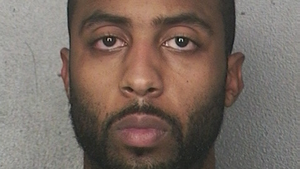 A suspended New York City cop accused of traveling to South Florida to provide law enforcement cover for a $200,000 drug deal is expected to plead guilty in federal court next week.

Phillip LeRoy, 28, of Queens, is scheduled to appear before U.S. District Judge William Dimitrouleas on Tuesday.

LeRoy is being held without bond at the Broward Main Jail on charges of cocaine trafficking, conspiracy and committing a first-degree felony with a weapon. He previously pleaded not guilty to the charges.

NYC cop served as insurance in drug deal, friend says
He will plead guilty to the conspiracy charge and the government will drop the other charges, said his lawyer, Paul Petruzzi. He faces a minimum of 10 years in prison.

Espinal, 27, of New York City, told authorities he was a drug courier and that he asked LeRoy to accompany him on a December trip from New York to Sunrise to pick up 22 pounds of cocaine.

LeRoy’s job, according to Espinal, was to flash his badge if they got pulled over.